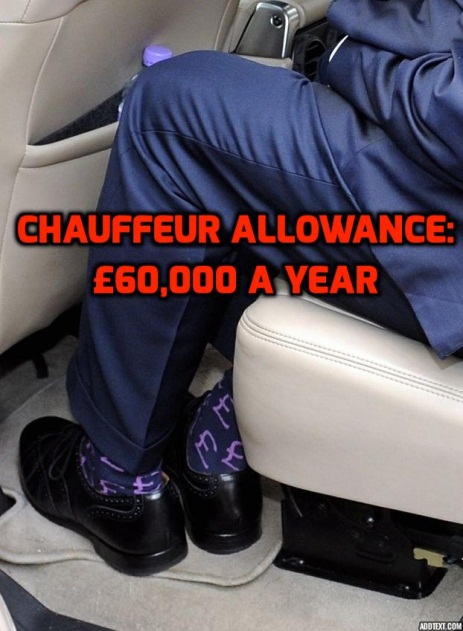 Dry your eyes people and get your violins ready, I cannot believe Nigel Farage claims he’s the “poorest man in politics”.

Before I start you should know this, the UK’s median gross pay for full-time employees is £517 a week, with “poverty” set at 60 per cent of that level. I also do not intend for my blog to be a UKIP bashing forum (although it may seem that way from this post) but when I saw this I just had to write about it!

In his appearance on Channel 4’s Gogglebox programme, the UKIP leader said, “I don’t think I know anybody in politics as poor as we are.” Mr Farage has been an MEP since 1999, and he described his role in the European Parliament as “a good job” after he was first elected. He claimed that if he had been working for Goldman Sachs he would need to earn £250,000 to match what the EU paid him because of taxation, secretarial allowances and “all the other games you could play”.

According to The Times, Ukip pays him a £60,000-a-year chauffeur allowance among other expenses, he earns a ‘daily subsistence allowance’ of £250 every time he attends the European Parliament, has an monthly EU allowance of £3,580 to cover UK travel, office management and running costs, and has his first-class travel to the continent covered.

The UKIP leader has even admitted paying his wife around £20,000 a year from taxpayers’ funds to work as his assistant and in 2014, Mr Farage was also accused of claiming £15,500 a year from the EU to pay for his constituency office despite the fact it was given to him rent free. He later said the allegation was a ‘smear’ as the EU money is his to spend as he see’s fit, but he was duly fined the absolutely life changing sum of £200 by the Electoral Commission for failing to declare the office as a gift anyway. Oh and his house in Kent is only worth around half a million quid.

However after all said and done, I had a quick look round the interweb and he might not be wrong after all, maybe he is the poorest man in politics after all? Or is he…?

David Cameron’s family fortune was made in tax havens

David Cameron’s father ran a network of offshore investment funds to help build the family fortune that paid for the prime minister’s inheritance, though entirely legal, the funds were set up in tax havens such as Panama City and Geneva, and explicitly boasted of their ability to remain outside UK tax jurisdiction.

At the time of his death in late 2010, Ian Cameron left a fortune of £2.74m in his will and In 2012 David Cameron’s net worth was estimated at almost £4 Million, his fortune was in part self-made and from property, most likely funded from parents/inheritance. The combined wealth of Mr and Mrs Cameron is likely to rise sharply in coming years because they will inherit an estimated £25 Million.

Oh and the combined wealth of his Cabinet is estimated at around £70 Million with around two thirds of cabinet members being millionaires in their own right.

Nick Clegg has an estimated fortune worth £2 Million

His wife is also paid by a law firm that helps the rich avoid tax and his father is chairman of bank with ties to tax havens, it must be said that there is nothing explicitly wrong with such a line of work. It is not illegal. Highly educated and expensively trained lawyers are perfectly entitled to make a living helping wealthy people and companies minimise tax, which sometimes involves creating complex offshore trusts.

He talks about transparency and stripping the big millions from politics, however he owns a £1.6 Million house in an exclusive London neighborhood and has in the past used the inheritance rules of the land to his advantage, some say his net worth might be £5 Million!

I could write more but all this is making me feel physically sick!

Former Labour MP and Chair of the “biggest party you’ve never heard of” TUSC (Trade Unionist and Socialist Coalition) When he was the MP for Coventry South East from 1983 to 1992. He was known for his standing as a “workers’ MP on a worker’s wage” taking only the wage of a skilled factory worker, which amounted to 40% of what was then an MP’s salary.

All the other TUSC parliamentary candidates that I have met or spoken too have also pledged to do the same, so Mr Farage YOU ARE NOT THE POOREST MAN IN POLITICS… Goodbye 🙂