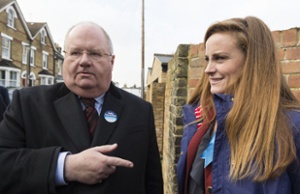 Today Steve Wilkins (Medway TUSC Council Candidate for Hempstead and Wigmore) and myself were out leafleting in Strood market again, and imagine my surprise when walking through the market I bumped into Eric Pickles!

Not literally of course, however he was rather hard to miss 🙂

I recognised him but couldn’t remember his name at first but I knew he was a Tory minister, you could tell because he had a massive entourage and 2 or 3 photographers taking pictures of him looking very stately, staring slightly upward at the sky, you know “that” look.

A short while later the procession of Tory campaigners came wandering past Steve and I which made me laugh because Steve started shouting “No More Cuts… Save the NHS… Stop Privatisation… No More Austerity…” etc. etc. I even heard Eric say “Oh How Lovely” then a couple of the Tory campaigners came past with Kelly Tolhurst and offered me a leaflet “It’s ok” I said “I’ve already read it and binned it, but you can have one of mine if you like”

I wonder if they decided to pop down because TUSC have been campaigning in Strood Market for weeks? Maybe it was just a coincidence, but I think maybe we are starting to scare them, and Kelly Tolhurst’s answer to a couple of Socialists giving out leaflets and talking to people was a “Shock and Awe” visit from Mr Pickles 🙂

Made me giggle anyway…